Posted at 20:53h in Features, Profiles by Focus 1 Comment
0 Likes

Samara Wolpe wins Woman of The Year.
The Leukemia & Lymphoma Society’s Man & Woman of the Year (MWOY) event at Skirball Center In LA on June, 1, 2014

My name is Samara Wolpe. I am seventeen years old, and a junior at Milken Community High School. I love to write, read, and study psychology. I’m the daughter of Eileen Ansel Wolpe, a writer and editor, and David Wolpe, the senior Rabbi of Sinai Temple in Los Angeles.

What was your inspiration to craft a fundraising effort for the Leukemia and Lymphoma Society?
My parents had cancer three times during my childhood. The first time, it was my mother. I was just a baby when my mom was diagnosed with reproductive cancer. She was lucky, her surgery was successful. But she was unable to have more children. That’s why I’m an only child.

The second time, I was six years old. My dad had a grand mal seizure that was caused by a brain tumor. We got lucky again; it was benign, and he survived. Three years later, when I was nine, my dad was diagnosed with non-Hodgkins lymphoma. One of the drugs he received with his chemotherapy was Rituxan. It was a breakthrough drug at the time, discovered by research funded by the Leukemia & Lymphoma Society. Before Rituxan, the average time to relapse was thirteen months. Because of this drug, my dad has now been in remission for over seven years. I’ve been able to go through high school with healthy parents.

My mom was a participant in LLS’s Team in Training for the last five years. She wanted to do something to say thank you for Rituxan, to make a difference. She was often asked to speak at her events, and she would occasionally she would take me along to talk to the teams as well. It was always a powerful experience for me. I learned that funding for cancer research comes from people who believe we can, and will, find a cure. It’s my turn now to be a part of that story, and pay it forward.

How did you feel when you got your first contributor?
Astonished. Although I had been planning this campaign for several weeks before kick-off, a part of me hadn’t really expected anybody to donate. So when I had my first contributor (besides my parents, who donated at the start of the campaign) I was incredibly excited and moved. Since then, the support has been overwhelming. I feel unbelievably lucky to be living in such a caring community. It’s one thing to imagine that you are going to do good in the world, and another to see it come to fruition. Every time someone donates, I am struck anew by the realization that my donors are helping me save lives. This experience has reminded me how much goodness there is in the world. 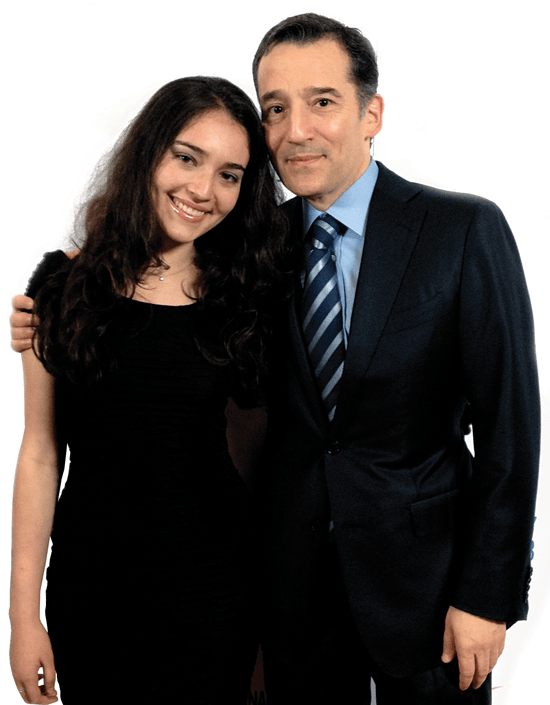 Samara with her Father, David Wolpe

What has been the greatest surprise you experienced with your fundraising effort?
The greatest surprise is how many people have been able to relate to the story of my childhood. Cancer is very isolating. I grew up feeling that I was alone in what I had gone through. But the moment my story was published on Huffington Post, comments started to pour in; not only with every donation, but from my friends, acquaintances, and even from people I had never met. So many have told me what I wrote described their own stories. It seems everyone has been touched by cancer in some way, and I had absolutely no idea. I want to thank everybody for their support and express how grateful I am. I was hesitant to share so much of myself with the world, but many people have reinforced that notion it was the right decision. Complete strangers have gone out of their way to make me feel comfortable, safe, and understood.

How can people participate/contribute to your campaign?
Online donations can be made at: mwoy.org/pages/calso/los14/treeoflife. While donations are, of course, central to my campaign, spreading the word is just as important. People can tell their friends and post the link to my story on Huffington Post, and my fundraising page on Facebook, Twitter, Google+, etc.
Checks made payable to the Leukemia & Lymphoma Society can be sent to: Samara Wolpe, c/o Sinai Temple, 10400 Wilshire Blvd, Los Angeles, CA 90024.

We are also looking for in-trade donations that can be auctioned on CharityBuzz, so if any celebrities or business owners are reading this, please contact me through Focus magazine at editor@focusmag.us

Is there anything else you want to say?
Someone recently asked me if I really thought finding a cure was possible. And I answered that I wholeheartedly do. My parents were young and healthy when they got cancer. They were in their 30s. Nobody expects to get cancer. But it happens, every day. When you give money to find a cure, you aren’t giving to some abstract person out there. There is no way of knowing how cancer will affect your life, the lives of your family, the lives of your friends. When you donate to LLS, the life you are saving could well be your own. Just a few decades ago, cancer was an automatic death sentence. Now, people who have been diagnosed are living out full, healthy lives. I want to see the day when cancer is no worse than the common cold. I want to find a cure.

And I need your help.